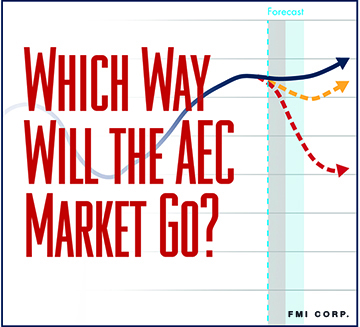 ARCHITECTURE, ENGINEERING, and construction (AEC) forecasters are struggling to comprehend the economic hardship that is likely to arise from the ongoing COVID-19 pandemic and resulting market influences. Although signs of a mild slowdown were prevalent before the pandemic, previous forecasts can be “thrown out the window,” says Richard Branch, the chief economist at Dodge Data & Analytics, of Bedford, Massachusetts.

Several recent surveys of industry leaders depict historic declines in expected business and project delays as the full brunt of restrictions related to the pandemic are realized. “The second quarter will be bleak,” Branch says. “As I look across the twenty-two sectors that we forecast, I don’t think there is a sector that is immune.”

The Construction Industry Round Table (CIRT)—a McLean, Virginia-based association of chief executive officers (CEOs) of America’s leading design and construction companies—puts this conclusion in stark relief. CIRT surveys its roughly 120 CEO members quarterly to produce a Sentiment Index, which measures market trends and business perceptions on a scale of 1 to 100, with 50 being neutral. Its second-quarter 2020 survey, released April 10, was devastating: The index plunged from 63.6 in the first quarter to 21.6. That is a historic low, according to FMI Corp., of Raleigh, North Carolina, which conducts and analyzes CIRT’s survey. In addition, nearly 60 percent of the survey’s respondents reported some extension to project schedules due to the uncertainty of the pandemic’s impacts. 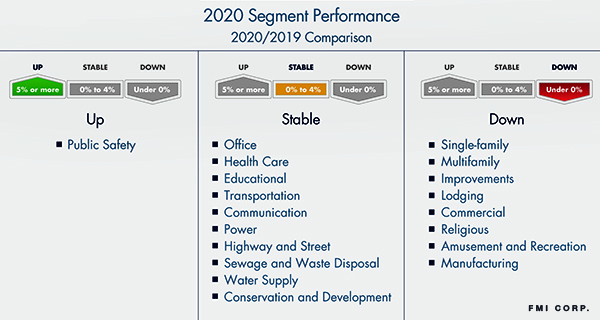 Similarly, an April 17 survey of more than 280 AEC firms conducted by AEC Advisors LLC—an investment banking and financial advisory firm for the AEC industry based in New York City—revealed that 38 percent of the respondents had already implemented layoffs or furloughs. The survey mentioned that CEOs have projected earnings declines of 10 to 15 percent for 2020—and these predictions may be underestimated, according to AEC Advisors.

In general, the construction branch of the industry has been negatively impacted the most, and via multiple channels, Branch says. These include impacts on a workforce that already lacked enough skilled labor, local bans on construction activity, general economic conditions, and supply chain problems. China, for example, is the leading exporter of construction materials to the United States, and it is difficult to tell when its supply chain will normalize, he says.

The day-to-day ramifications are long-term in that they will affect company and industry decisions not only in 2020, but also in the years following, says Brian Strawberry, a senior economist at FMI. One scenario under consideration by FMI is a long-term decline in gross domestic product (GDP). This would lead to a “disintegration” of construction put-in-place on par with, or perhaps even worse than, the Great Recession, which began in 2007. And recovery could take years. 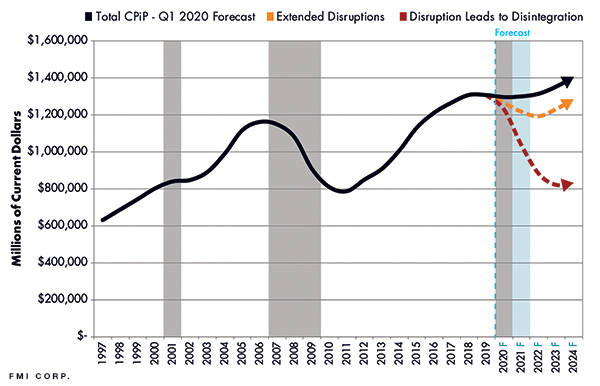 “We baked a financial collapse into our worst-case scenario,” Strawberry says. “What that looks like is debatable, but ultimately what that means is fewer companies buying fewer construction services.”

A less drastic scenario depicted by FMI, labeled “extended disruptions” and lasting only until the end of the year, would see a recovery to pre-COVID-19 levels by 2024.

On the upside, business could rebound quickly for some sectors if the spread of the virus declines by July, Branch says. That would create a very sharp decline over a very short period and a return to normal construction-start levels by the latter half of 2020. This optimistic, V-shaped scenario is based on the fact that the number of projects in the planning phase has not cratered. In mid-April, he says, “There was well over $5 billion worth of nonresidential building projects entering the very early stages of planning in our database. If the economy starts to normalize in the second half of year … that could lead to a gradual recovery of construction activity.”

FMI’s managing director, Jay Bowman, also says that the market could take a big hit but rebound quickly—but perhaps only in some market segments. In a video posted to the firm’s website, Bowman discusses the implications of COVID-19 on the industry and the economy. “There is so much uncertainty now … and not every segment reacts the same way,” he says.

For example, the nonbuilding structures sector has typically been the least impacted by recessions over the past 30 years, according to Bowman. In addition, he expects transportation, education, and communications projects to rebound quickly along with highways and streets, water supply, and sewage and waste disposal projects. Commercial construction and power sectors may suffer the longest downturns should a prolonged recession occur, he says.

Key Differences from the Past

“The U.S. economy was chugging along until early March,” Branch says. “And now we are looking at the economy contracting for the full year.”

Two quarters of declining GDP can be classified as a recession—and at press time, the economy had not yet reached that tipping point. But local governments were expected to delay project starts because of shortfalls in revenue, which could then delay the start of projects into 2021.

To keep their economies rolling, some state transportation departments are bumping projects up before the recession officially hits, according to Branch. The Pennsylvania Department of Transportation (DOT) recently unfroze 60 projects worth $1 billion, while the Florida DOT announced $2.1 billion in projects, and in Minnesota, state transportation officials announced $1 billion in highway and bridge work to be started over the next six months, Branch says.

Issam "Sam" Minkarah, professor emeritus of civil engineering in construction management at the University of Cincinnati, has died. He was 90.
Read more
Perspectives

ASCE's COVID-19 Community Calls podcast series featured civil engineers checking in on how the pandemic was changing their worlds. Now they're back reflecting with a year's worth of perspective.
Read more
©2021, Civil Engineering Source