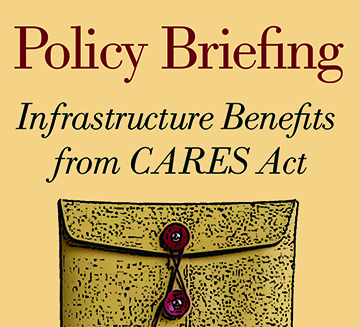 LOOKING TO BOOST the sagging fortunes of three U.S. infrastructure sectors hit hard by the COVID-19 pandemic, Congress and the Trump administration provided billions in new federal funding for transit, passenger rail, and airports as part of legislation finalized in late March to offer economic relief in the wake of the pandemic. Signed into law by President Donald Trump on March 27, the $2-trillion Coronavirus Aid, Relief, and Economic Security (CARES) Act also included language that is expected to result in greater funding for harbor maintenance in the future.

Transit Allocations
The CARES Act appropriated $25 billion to the Federal Transit Administration (FTA) to be disbursed as grant funding to public transportation systems across the country. The legislation directed the FTA to allocate the funding through its existing formula-funding programs. The agency was instructed to apportion the funding among the programs in accordance with the same ratio that Congress used when setting fiscal year 2020 appropriations.

On April 2, the FTA announced that approximately $22.7 billion of the transit funding from the CARES Act would go to urban areas, roughly $2.2 billion would go to rural areas, and $30 million would go to Native American reservations. The remaining $75 million would be used by the FTA for administrative and oversight purposes, as stipulated in the law.

“We know that many of our nation’s public transportation systems are facing extraordinary challenges, and these funds will go a long way to assisting our transit industry partners in battling COVID-19,” said K. Jane Williams, the FTA’s acting administrator, in an April 2 news release issued by the U.S. Department of Transportation (DOT). “These federal funds will support operating assistance to transit agencies, including those in large urban areas.” The funds will also be used to “pay transit workers across the country not working because of the public health emergency.”

“We know that many of our nation’s public
transportation systems are facing extraordinary challenges,
and these funds will go a long way to assisting our
transit industry partners in battling COVID-19.”
—K. Jane Williams, FTA acting administrator

“Funding will be provided at a 100 percent federal share, with no local match required, and will be available to support capital, operating, and other expenses generally eligible under those programs to prevent, prepare for, and respond to COVID-19,” states the DOT news release. “Further, operating expenses incurred beginning on January 20, 2020, for all rural and urban recipients, even those in large urban areas, are also eligible, including operating expenses to maintain transit services as well as paying for administrative leave for transit personnel due to reduced operations during an emergency.”

As for the largest apportionments for urban transit programs, the biggest by far was approximately $5.4 billion for the New York City metropolitan area, including Newark, New Jersey, and portions of Connecticut. The Chicago metropolitan area received nearly $1.5 billion, while the Southern California cities of Los Angeles, Long Beach, and Anaheim were awarded a combined $1.2 billion.

Slightly more than $1 billion was provided for Washington, D.C., and the adjacent areas of Maryland and Virginia. Meanwhile, the Boston metropolitan area, including adjacent areas of New Hampshire and Rhode Island, received nearly $884 million.

The CARES Act also provided slightly more than $1 billion in grants for the National Railroad Passenger Corp., or Amtrak. Of this amount, $492 million was for Amtrak’s Northeast Corridor, while the remaining $526 million was directed for use on the rest of the passenger rail provider’s system, including those routes that are supported in part by states. Of the latter source of grant funding, at least $239 million is to be used to offset increases that states otherwise would have to pay to support Amtrak routes.

Assistance for Airports
With the health scare surrounding the COVID-19 pandemic hitting the aviation industry particularly hard, Congress provided $10 billion in the CARES Act for airports. This funding is to be disbursed as grants through the Airport Improvement Program overseen by the Federal Aviation Administration. The legislation also included $100 million for general aviation airports.

With the health scare surrounding the COVID-19 pandemic
hitting the aviation industry particularly hard, Congress provided $10 billion in the CARES Act for airports.

This infusion of funding comes at a time when airports are facing precipitous declines in passenger traffic volume and the prospect of steep losses as a result of the pandemic, according to the Airports Council International–North America (ACI–NA), of Washington, D.C. “Total airport operating revenue is expected to decrease by about $12.3 billion in 2020, representing a nearly 49 [percent] reduction,” states a March 20 fact sheet from the ACI–NA. Compounding the problem, the ACI–NA says, airports overall can expect to see a decrease in 2020 of close to $1.6 billion in passenger facility charges, the fees assessed to airline passengers as part of their ticket price. Airports use passenger facility charges to fund facility improvements.

Unlocking Harbor Maintenance Funding
Although it did not provide direct funding for ports and harbors, the CARES Act included language that is expected to help many of them in the long term. Specifically, the legislation ensures that funds collected in the future as part of the Harbor Maintenance Trust Fund (HMTF) are used for their intended purpose—maintenance dredging of harbors by the U.S. Army Corps of Engineers. The HMTF is funded by an ad valorem tax imposed on imported and domestic cargo handled at U.S. ports.

The legislation ensures that funds collected in the
future as part of the Harbor Maintenance Trust Fund are
used for their intended purpose—maintenance dredging
of harbors by the U.S. Army Corps of Engineers.

Historically, Congress has failed to appropriate all the funds in the HMTF, choosing to leave money in the trust fund to help offset shortfalls elsewhere in the federal budget. Approximately $10 billion of previously collected revenues reside in the HMTF. ASCE and other infrastructure advocates have long called on Congress to spend down the balance in the trust fund.

Essentially, the CARES Act precludes Congress from allowing future funds to languish unspent in the HMTF. In doing so, the legislation “included a long-time ASCE priority—a provision for unlocking the Harbor Maintenance Trust Fund,” says Emily Feenstra, the Society’s managing director of government relations and infrastructure initiatives. “The provision does not allow for Congress to retroactively spend the current HMTF balance, but instead ensures all future HMTF revenues—an expected $24.5 billion over the next decade—are used for their intended purposes of dredging at our nation’s ports and harbors,” Feenstra says.

Future Priorities
With much of America under some form of quarantine as a result of COVID-19, ASCE and others are looking to Congress to provide additional funding for other infrastructure sectors that also are hurting financially. “Passing the CARES Act addressed some of the immediate economic impacts of the pandemic, but we need additional action to ensure the health of the American economy,” Feenstra says. “Infrastructure investment has historically been a key tool for getting the American economy moving again.”

With much of America under some form of quarantine
as a result of COVID-19, ASCE and others are looking to
Congress to provide additional funding for other
infrastructure sectors that also are hurting financially.

In an April 1 letter to President Trump, House Speaker Nancy Pelosi (D-California), and Senate Majority Leader Mitch McConnell (R-Kentucky), ASCE President Kancheepuram N. Gunalan, Ph.D., P.E., D.GE, F.ASCE, spelled out the priorities the Society would like to see included as part of future legislative efforts aimed at improving the economy. Chief among these priorities is reauthorization of the federal Surface Transportation Program, which is scheduled to expire on September 30.

In particular, such a reauthorization should address the long-term solvency of the Highway Trust Fund, Gunalan wrote. “While one-time infusions into our nation’s Surface Transportation Program have had varying degrees of success, investment in a multiyear surface transportation program is a guaranteed way to provide both short-term and long-term economic benefits,” he stated.

Other ASCE priorities include reauthorization of the Water Resources Development Act (WRDA). Last renewed in October 2018, the WRDA directs the efforts of the Corps and typically includes other provisions related to water resources. ASCE also is calling on Congress to increase federal funding for clean water and drinking water programs; raise the existing cap on tax-exempt private activity bonds used by state and local governments to issue tax-exempt debt for qualified highway or surface freight-transfer facilities; and eliminate or increase the cap on passenger facility charges to enable airports to garner more funding.