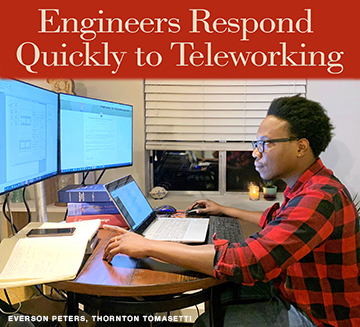 AS COVID-19 SPREAD across the world and state and local governments closed down businesses to encourage social distancing, engineering firms faced two challenges: keeping their employees safe and continuing to work for their clients—many of whose projects were deemed essential.

The solution was simple: have everyone work from home.

But the execution was complex. Combining longstanding processes with new measures meant ensuring that everyone had the tools they needed to make it all work—from laptops and access to powerful servers to the right office furniture and equipment. In some cases, new policies were required.

For firms with offices in China and elsewhere in Asia, the reality of what would be necessary to combat the pandemic hit early. Starting in roughly late January, key executives of Arup—which has offices in Hong Kong, Beijing, and Shanghai as well as one in Wuhan, China, where the outbreak began—started weekly discussions. The goal was to “understand the impacts of the virus and what we could do,” says Andy Howard, the Los Angeles-based chair of Arup’s Americas region.

Fortunately, none of Arup’s Wuhan employees contracted COVID-19, as far as the firm knows, Howard says. But Arup’s presence in China helped executives “understand in real time what was happening and what our colleagues had seen work well,” he explains.

The need for employees to telework was one of the major lessons learned, Howard notes. (When interviewed, Howard and all other sources for this article were working from home.) Also critical was the role of communication in informing employees about what measures they should take to protect themselves. The firm stressed a “strong sense of social responsibility to each other,” Howard explains.

Thornton Tomasetti, which is based in New York City, developed an emergency training program in English and Chinese for its offices in Asia. The effort was assisted by an engineer from China stranded in the United States because of travel restrictions. The employee helped the firm use Microsoft Teams to continue to collaborate on its Chinese projects, notes Jim Dray, Thornton Tomasetti’s chief information officer, who is based in New York City.

Back in the United States

Lee W. Slade, P.E., M.ASCE, the Boston-based chair of Walter P Moore, headquartered in Houston, says, “We got our first sense of the potential U.S. impact of the coronavirus” on February 2, when two employees returning from China were asked to self-quarantine for two weeks. At the time, that seemed like “an abundance of caution,” Slade adds, but “in retrospect … it set the tone for our proactive response.” By March 3, for instance, Walter P Moore “repurposed our biannual meeting of senior principals to conduct a scenario-planning exercise that helped us examine various potential economic impacts of the spread of COVID-19,” Slade says. “Just two weeks later, the most pessimistic of those scenarios seemed very real.”

By early April, a Walter P Moore stockholders’ meeting was conducted as a fully remote webinar broadcast, with all 132 stockholders participating from their homes, Slade adds.

For WSP USA, which has some 10,000 employees at more than 150 offices across the United States, the challenges of enabling everyone to work from home were eased somewhat by an existing telework policy and previous investments in the technology and software to make such work possible. This included a virtual private network (VPN), Microsoft Teams, Skype, and Zoom, explains Rich Driggs, WSP USA’s chief operating officer, who works in Atlanta.

Thornton Tomasetti had already been conducting research and development (R&D) on a new generation of virtual desktop systems that would allow employees to do their work remotely with “whatever machine they could get their hands on,” says Dray. Although that program was not ready to start when the crisis first broke, he says, “Basically, we finished six months of R&D in six days.”

The new system ultimately “plugged the gap” for numerous employees who didn’t have the right computer equipment with them when they were told they had to work from home or those who didn’t have sufficient internet service at home, Dray concludes.

For Dewberry, based in Fairfax, Virginia, some offices “had about twenty-four hours’ [notice] to follow state-level stay-at-home orders,” notes Molly Johnson, the firm’s chief communications officer. Information technology investments made before the pandemic proved invaluable and “made it possible to make the transition and keep working,” Johnson says.

Woodcliff Lake, New Jersey-based McLaren Engineering Group expanded its VPN in early March in anticipation of teleworking, notes William B. Gorlin, P.E., S.E., M.ASCE, the vice president of the firm’s entertainment division. Then, nearly the entire company logged in to the system “to test it before all employees were allowed to work from home,” Gorlin says.

Although most Arup employees already had the laptops or other technology they needed to telework, those who make 3-D models via building information modeling (BIM) systems did not, notes Howard. So Arup quickly expanded the number of special remote servers that could handle BIM requirements from “a couple of hundred to about five hundred in a week,” notes Howard.

Like many of the executives interviewed here, Howard highly praises the efforts of his firm’s information technology team.

Perhaps the greatest challenge in working from home has involved employees’ personal lives. “With schools and day cares being closed, many employees are juggling work and childcare and lesson plans and sometimes even the additional responsibility of caring for a loved one who may be sick or needing special attention,” says Johnson. “Work-hour flexibility stretching into evenings and weekends has helped balance these challenges.”

Flexible schedules have also resulted in “a strengthened sense of camaraderie among staff,” Johnson adds. “We’ve had staff post on our intranet, sharing their struggles and tips, with others chiming in, echoing the sentiments and offering their own solutions.”

Andy Fry, P.E., S.E., LEED AP, the chief operating officer at Seattle-based Magnusson Klemencic Associates, is experiencing the benefits of flexible work time directly. It is now possible to have lunch with his wife and kids and take walks together around his neighborhood even if it means stretching the workday into the early evening. Evening work is easier now that closed schools mean there are no band concerts or practices for his kids, Fry notes.

Managers are keeping in touch with their staffs via regular online meetings, using Zoom, Microsoft Teams, GoToMeeting, or other systems. And virtual “happy hours” help employees maintain contact with colleagues.

An unexpected challenge to telework involves the physical side of employees’ home office setups. Dining room or kitchen table chairs are not comfortable when you try to sit in them for eight hours a day, Fry says. So Magnusson Klemencic Associates arranged for employees to return to the office to retrieve their work chairs—which, in the interest of social distancing, were left in the building’s elevator lobby so that staff would not have to enter the actual office space, Fry explains.

Like all the executives interviewed here, Fry reports that teleworking seems to be working well. “We’ve been able to be far more productive than I would have thought when we launched it,” he says. Driggs is also pleased with the results—so far. But “we have to see if this is sustainable in the longer term,” he adds. “April and May will be important to us to understand if we really are running as efficiently and effectively” as has been the case so far, Driggs notes.

The COVID-19 pandemic has both highlighted the importance of fundamental community infrastructure and made it increasingly difficult (if not downright dangerous) to construct and update that very infrastructure.
Read more
Business

Trimble has developed a program to donate technology labs kitted out with its hardware and software to universities and institutions across the globe.
Read more
Perspectives

On-the-ground advice on avoiding burnout during a pandemic

Tommy Faulkner, P.E., LEED AP, answers seven questions and offers advice on how to avoid burnout for yourself and your staff during a pandemic.
Read more
Innovation

Automation and tech synergy are key in the design of the 36-story-tall building in Hong Kong, where occupants will be able to move from sidewalk to workstation without touching a thing.
Read more
©2021, Civil Engineering Source