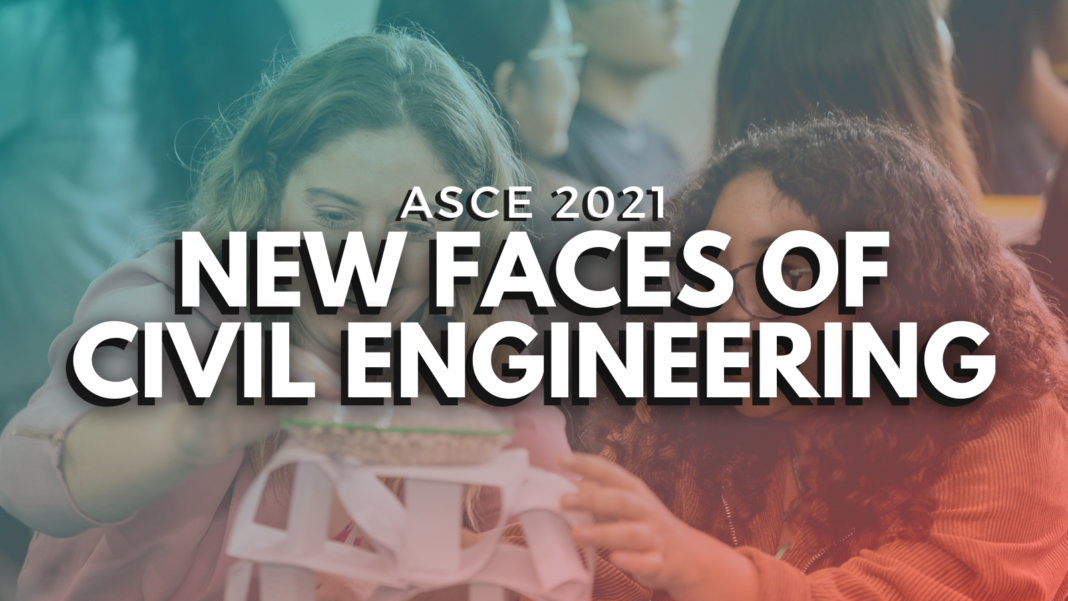 Chloe Gharios always wanted a job where she could help people. But with a fear of blood and needles, it’s safe to say a career in medicine was off the table.

But thanks to her parents’ inspiration, Gharios chose civil engineering. Her father, an environmental civil engineer, introduced her to the CE world. And her strong, supportive mother taught her to never be intimidated by the “man’s world.”

Now a civil engineering associate at the Los Angeles Department of Water and Power in California, Gharios is dedicated to enhancing the future of clean energy and encouraging young engineers to break the mold. ASCE has honored Gharios, EIT, A.M.ASCE, as a 2021 New Face of Civil Engineering.

Her mission is to inspire girls and young women to break stereotypes and choose careers in male-dominated STEM fields. It’s a goal emanating from her mother’s words all those years ago. As a 21st century role model, she’s taken to social media to spread that message.

“There aren’t many women in our field. When there are, there are often stereotypes about them,” said Gharios.

“I was in an MBA class with mostly business students. The guy next to me said, ‘I thought you were an engineer.’ When I said I was, he responded, ‘Your phone case is pink and sparkly. I wouldn’t think an engineer would have that.’ Something as simple as a girly phone case, to some people, doesn’t seem like it could belong to an engineer. So that’s what I hope my content does – breaks stereotypes.”

She recently spoke with the Civil Engineering Source about her career.

Civil Engineering Source: Why did you turn to social media to advocate for women in STEM? How did you come up with #StompingOutStereotypes?

Chloe Gharios: I’m a millennial, so social media began in my childhood. I always saw bloggers and women on social media talking about things. But I noticed there was nothing I truly related to. I love fashion, but at the same time, I wanted to see women who were doing what I was doing every single day.

Through K-12 outreach, I noticed how much kids were on their phones and on social media. So, I want them to see those kinds of role models as well. And that’s how it started. I thought I could reach more people than I would in person. I have a passion for going into schools and talking about engineering and education. But this way, I could show a little more personality and break the stereotypes.

#StompingOutStereotypes started completely by accident. I took a photo of my feet – one in a heel and one in a steel-toed boot. My message behind it was, “Be both.” You can love fashion and be girly, but also be an engineer.

When I posted it [on Instagram], I was on a trip. I was driving through the desert, lost service, and forgot about it. When I checked my phone again, it had gone viral.

I can’t take credit for #StompingOutStereotypes. Someone commented on the post, saying it should be a challenge. Then someone else came up with “stomping out stereotypes.” So, I said, “All right, let’s do it!” That’s when it blew up.

Now when you look at #StompingOutStereotypes, there’s hundreds of different versions. There’s one featuring a woman en pointe in a ballet slipper and her other foot is in a boot. My photo, for whatever reason, resonated with a lot of women.

There’s been a few other posts that have blown up, but not like #StompingOutStereotypes. One quote I’m known for is, “A female engineer is a princess who can build her own castle.”

Source: What other ways are you promoting women in STEM through your work?

Gharios: In 2019, my Los Angeles Younger Member Forum Group colleague, Nikki Zulueta, and I, came up with the idea to celebrate International Women in Engineering Day for the first time. About 50 women joined us in Manhattan Beach to talk about how women can break stereotypes and break glass ceilings. There were a lot of male attendees as well. They took part in the conversation about how men can be allies to women in the field.

In 2020, we held it virtually because there was no in-person option. There were about 75-80 women and men there. So that’s one of the big things I’ve recently been involved in to promote women in STEM, and specifically, women in civil engineering.

I also love going into schools, especially when there are two female engineers [visiting]. I remember one second-grade teacher asked her students, “Are you surprised to see who came for engineering day?” One little girl said, “Yeah, I thought it would be two boys, but it’s two girls.”

I like to show my personality when I go into schools. I wear a lot of pink and my hardhat to really show it on a level they can understand – “There’s this girl wearing pink, and I like pink. And she’s an engineer, so I can be an engineer.”

Unfortunately, for the last year, I haven’t been able to do that. But I’m still trying to keep up with students virtually. We’re doing Engineers Week again this year, but everything will be virtual.

Source: What is the quality you most admire in someone?

Gharios: I really like people who are straightforward because that’s how I am. I admire people who are true to themselves – true to their ideals and what they believe in and are proud of that. It’s something I try to promote too. In a different sense, you can go into STEM and be true to yourself. There’s no certain personality or way you should act to be successful in a STEM career.

Source: What does the future of civil engineering look like to you? How do you see yourself contributing to it?

I hope my little corner of the internet and the real world helps contribute to that, by showing young people of all backgrounds and genders that they can contribute to their own world by becoming an engineer or having any STEM career. Nothing can stop them, and there’re no stereotypes they should mold to.

Source: Imagine you meet a genie. What are the three things you’d wish to change about the civil engineering industry?

Gharios: One thing I wish is that we knew everything going on underground prior to construction. That way, we don’t have to open things up to later find out there’s a huge problem. I’ve had way too many projects where we hit utilities that were never reported to be there. I don’t know why, but that’s the first thing that came to my mind.

Another would be that there are no stereotypes. Everyone could become a civil engineer and not have to deal with questions of whether they are fit to be an engineer. People would not assume a woman is an administrative assistant just because she’s the only female in the room. I wish all stereotypes were already broken.

And I think as much as people think social media has negatives, which everything does, it also provides a positive. There are many women speaking out through it now, showing their true selves and that they’ve made it. I think it’s inspiring to the next generation who is on these platforms and seeing these women killing it.

All media can be good, not just social media, because it can hit the next generation and the masses in ways we weren’t able to before. Like with ASCE’s Dream Big and seeing all these different things engineers can do. It’s inspiring to all age groups. As an adult you can appreciate it. But I’ve also shown it to high school and young elementary students. They all get something different out of it.