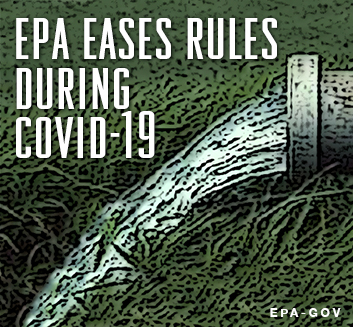 FACED WITH THE PROSPECT that regulated entities might have trouble complying with certain regulatory requirements during the COVID-19 pandemic, the U.S. Environmental Protection Agency (EPA) released temporary guidance in late March stating how it intended to handle noncompliance during this time, noting that, among other things, it would not seek civil penalties for most routine violations.

Environmental groups immediately criticized the move, contending that it would lead to greater pollution from regulated entities, a charge flatly denied by the EPA.

For their part, water sector representatives have welcomed the guidance as a useful clarification regarding how to maintain compliance in the event that they experience personnel shortages or other complications pertaining to COVID-19.

On March 26, the EPA released a memorandum from Susan Parker Bodine, the agency’s assistant administrator for enforcement and compliance assurance, spelling out its plans for exercising “enforcement discretion” during the COVID-19 crisis. The guidance, which applies retroactively to March 13, addresses routine compliance monitoring and reporting as well as facility operations. Applicable only to civil and not criminal violations, the guidance does not apply to activities conducted as part of the Superfund program or the Resource Conservation and Recovery Act.

“In general, the EPA does not expect to seek penalties for violations of routine compliance monitoring, integrity testing, sampling, laboratory analysis, training, and reporting or certification obligations in situations where the EPA agrees that COVID-19 was the cause of the noncompliance and the entity provides supporting documentation to the EPA upon request,” the memorandum states.

However, entities experiencing such noncompliance are expected to report it using existing procedures. If such reporting is impracticable or no applicable reporting procedures exist, entities should “maintain this information internally and make it available to the EPA or an authorized state or tribe upon request,” the memorandum states.

Because of the importance of safe drinking
water in maintaining public health during the pandemic, the EPA “has heightened expectations for public water systems.”

In the event that “facility operations impacted by the COVID-19 pandemic may create an acute risk or an imminent threat to human health or the environment,” the facility in question “should contact the appropriate implementing authority (EPA region, authorized state, or tribe),” the memorandum states. A facility also should notify the implementing authority “as quickly as possible” if it “suffers from failure of air emission control or wastewater or waste treatment systems or other facility equipment that may result in exceedances of enforceable limitations on emissions to air or discharges to water, or land disposal, or other unauthorized releases.”

In situations in which compliance is “not reasonably practicable” as a result of COVID-19, facilities with environmental compliance obligations must “minimize the effects and duration of any noncompliance,” according to the memorandum. Facilities must also “identify the specific nature and dates of the noncompliance” and indicate how it was caused by COVID-19. Also to be documented are the “decisions and actions taken in response” to the noncompliance, “including best efforts to comply and steps taken to come into compliance at the earliest opportunity.”

Because of the importance of safe drinking water in maintaining public health during the pandemic, the EPA “has heightened expectations for public water systems,” according to the agency’s memorandum. “The EPA expects operators of such systems to continue normal operations and maintenance as well as required sampling to ensure the safety of our drinking water supplies,” the agency said.

Should worker shortages occur in the water sector, the EPA “will consider continued operation of drinking water systems to be the highest priority,” according to the memorandum. In the event of such shortages and limited laboratory capacity at drinking water systems, monitoring for microbial pathogens is to take “highest priority,” the agency said.

On the same day that the EPA released its temporary compliance guidance, Gina McCarthy, the president and chief executive officer of the Natural Resources Defense Council (NRDC), of New York City, rebuked the agency for its action. “This is an open license to pollute,” said McCarthy—who served as the EPA administrator under President Barack Obama—in a March 26 news release from the NRDC.

On April 1, the NRDC and multiple environmental and public-interest advocacy groups petitioned the EPA. They sought to ensure that the temporary compliance guidance would be enforced as transparently as possible. In the petition, the groups requested that the agency “issue a rule requiring companies that take advantage of the policy [outlined in the temporary compliance guidance] to publicly disclose—in writing—when they stop monitoring or reporting their air and water pollution emissions, along with a detailed justification for doing so,” according to an April 1 news release from the NRDC. The petition also calls on the EPA to make this information publicly available within one day of receiving it.

On March 30, the EPA issued a news release responding to what the agency maintained was “reckless reporting” regarding its compliance guidance. “This temporary policy is not a license to pollute,” the EPA stated in its release.

“The policy does not say that the COVID-19 pandemic will excuse exceedances of pollutant limitations in permits, regulations, and statutes,” the release stated. The EPA “expects regulated entities to comply with all obligations and if they do not, the policy says that [the] EPA will consider the pandemic, on a case-by-case basis, when determining an appropriate response.”

Andrew Stewart, counsel in the Washington, D.C., office of the law firm Sidley Austin LLP, agrees with the EPA’s assertion that its temporary compliance guidance is not a green light to pollute. From 2003 to 2015, Stewart worked as a career employee in the EPA’s Office of Enforcement and Compliance Assurance, the same office that issued the March 26 memorandum.

Current EPA enforcement staff members have emphasized in conversations with Stewart that they “will be very carefully scrutinizing any requests for enforcement discretion or any force majeure requests,” he says. “There cannot be just a generalized statement that, because of the pandemic, compliance is more difficult,” Stewart notes. “As I understand it from the memo and what I’ve heard directly from EPA staff, there has to be a detailed and particularized showing that the pandemic has prevented compliance from happening.”

For wastewater treatment facilities, the EPA’s temporary compliance guidance provides some reassurance that the agency will acknowledge their hardships in the event of staffing shortages, says Amanda Aspatore, the chief legal counsel for the National Association of Clean Water Agencies, of Washington, D.C. “This is going to be our new normal for a while, so we wanted a responsible path forward to work with regulators if, down the line, those that are having challenges have to prioritize things,” Aspatore says.

What are the costs of life-cycle distributed stormwater control measures?

A new paper in the "Journal of Sustainable Water in the Built Environment" presents a module that advances understanding of stormwater cost profiles using a process-based tool.
Read more
Society News